Here is the before and after photos of the following tutorial:
Before: 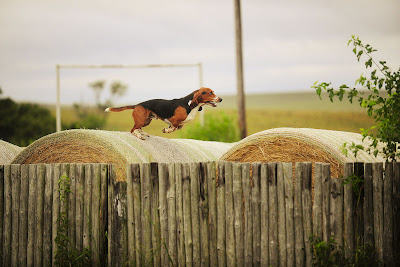 The very first thing I did to start my edit was open up the unedited photo of Charlie into Photoshop.  You can find PW’s original photo here.

Once opened I duplicated the photo (right click on photo in layers pallet>duplicate layer).
Then I used the clone tool to get rid of the poles by holding the Alt key down while clicking my mouse next to the poles, release, then painted the poles away. 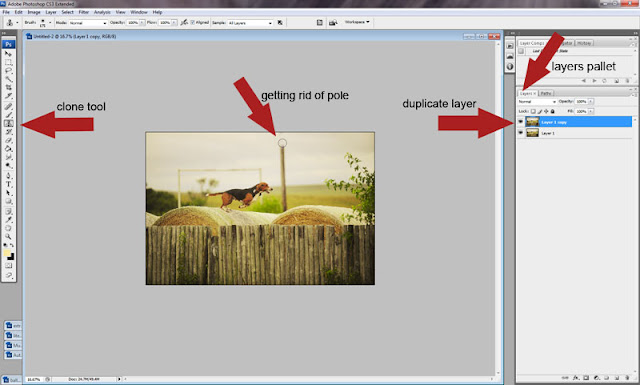 Next, I realized for my idea I would need way more sky then the original photo had. So I created a new canvas by going to File>New and adjusted the width and height. 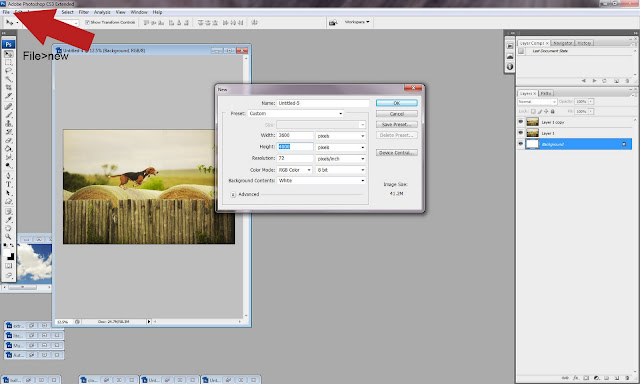 Once I had my new taller canvas, I used the Move Tool and took my edited ‘no poles Charlie’ photo to its new taller home. Just drag it on over there. 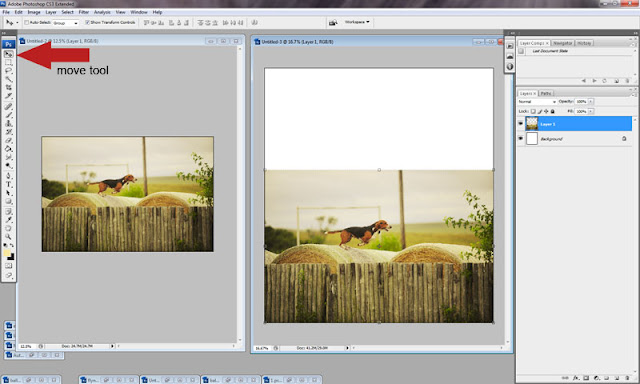 (uhhh whoops.. please ignore the fact that the poles are there!)

Once Charlie was in his new home I duplicated his layer and slightly erased the sky above him. Then using my clone tool I erased him. I then added a cloud layer and adjusted its opacity to 40%. 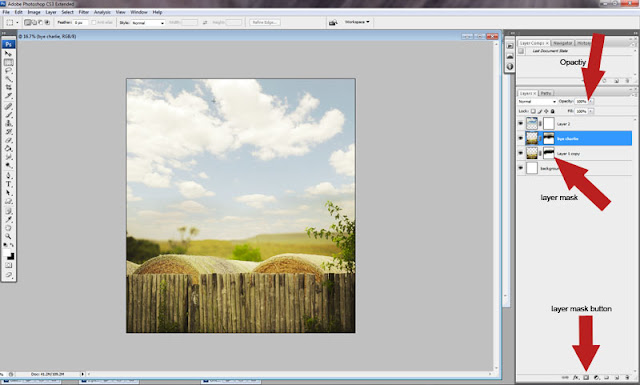 Helpful Hint that took me forever to find: By adding layer masks to each photo and using a black paint brush you can be sure not to permanently get rid of something. If I took out too much sky??? I would just repaint my layer mask with a white brush and start over.

Now we need to add Charlie back into the photo the way I want him. In order to do that I got the original Charlie photo and use the Lasso Tool to trace around him. 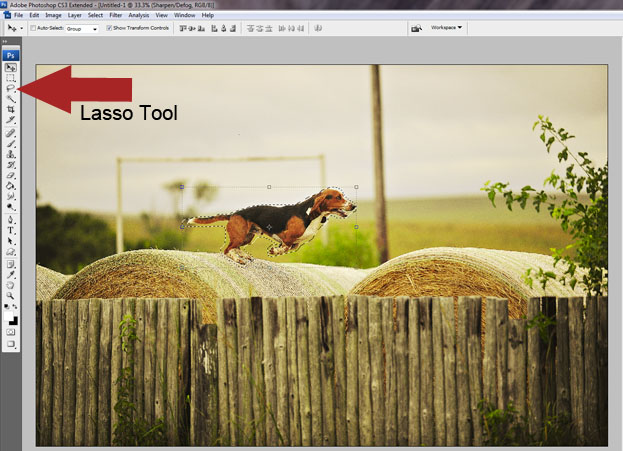 Once he is traced, I use the move tool moved him to my edited photo. Once Charlie was where I wanted him I curved his tail a bit, adjusted his back legs (so they weren’t so flat) and added balloons, goggles, and three different textures. 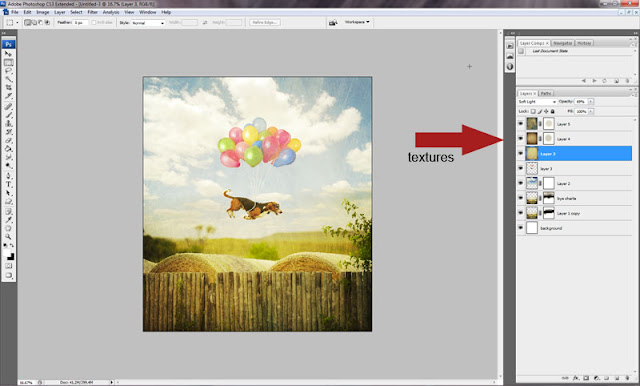 Then I ran the Soft Urban action by Flora Bella and then on top of that, ran the Pastels Tints and Hazes Action, also by Flora Bella. 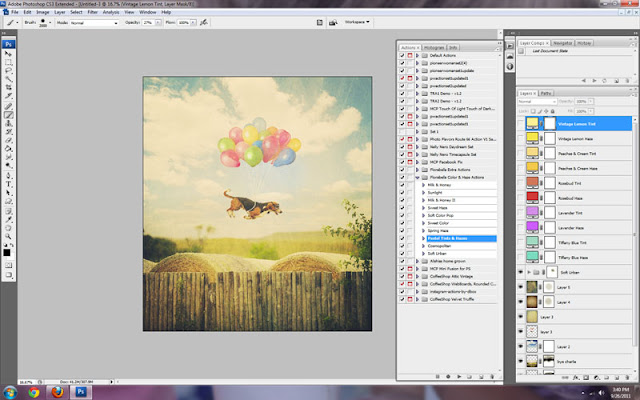 After tweeking the actions a bit by adjusting their opacity and overlays I thought the photo was a little too dark for the whimsical look I was going for, so I opened curves to lighten it a bit. 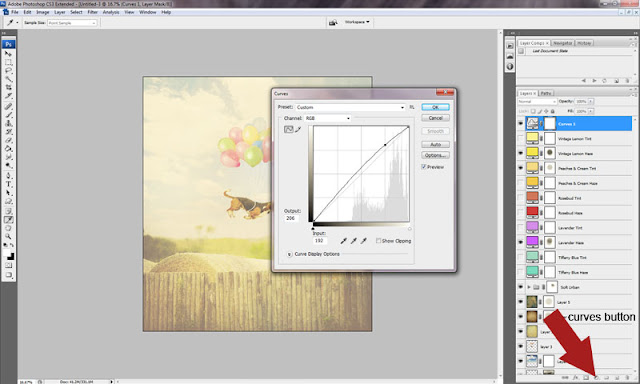 Whoo Hoo! I’m done! buuuuut I decided to add a little vintage-ish frame so I flattened my image (ALWAYS SAVE BEFORE YOU DO THAT!!) opened Custom Shapes>Rounded rectangle tool and dragged my frame onto my photo. 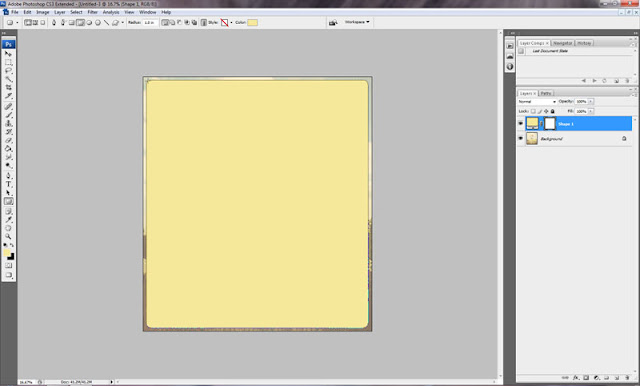 haha.. so in order to SEE my photo with my new yellow frame I clicked on Path selection tool, click on photo, and then up top I click Subract from shape. 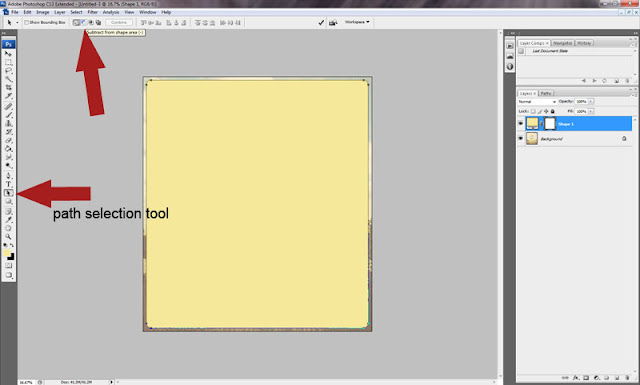 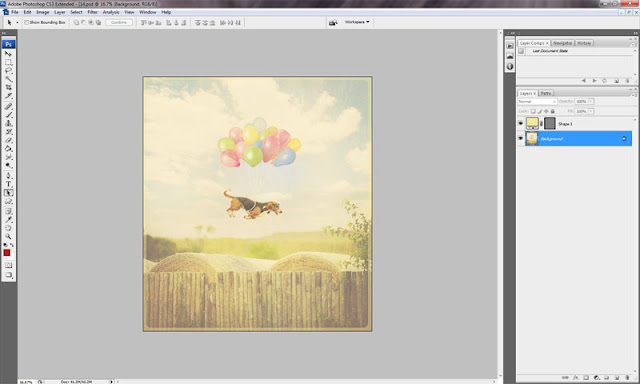 This was my very first attempt at writing a tutorial..
Was it helpful? Did it stink big time?
I have taught myself PS with the help of Google and other blogs so I probably don’t do everything the ‘right’ way, but it works. 🙂
I’m willing to do more tutorials if you enjoyed this one!
Just follow me and let me know!!
Thanks for reading!